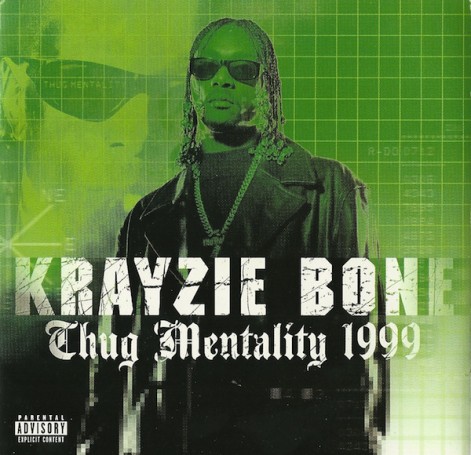 Maybe it’s that fabled Midwestern work ethic fueling the 38 tracks on “Thug Mentality 1999” (Relativity), the double-album solo debut by Cleveland’s Krayzie Bone. A member of the rap group Bone Thugs-N-Harmony, Krayzie Bone has a rapid sing/talk style that allows him to cram more lyrics into one song than some rappers include on a whole album. Yet the beauty of Bone’s delivery is that it sounds so effortless, despite the obvious toil behind it. Unlike the hurried gasping-for-air machismo of rappers such as DMX, Busta Rhymes and Mystikal, Krayzie Bone’s melodic singsong rhymes have an eerie, otherworldly quality suggestive of haunting inner voices and Shakespearean apparitions.

This works to chilling effect on “Look at You Now,” a dramatic interlude depicting a heinous crime while Bone chants ominously in the background, “Just take a look at yourself/ You don’t even know where you’re going to, do ya?” But ultimately, Bone is less a judge of the thug life than a guide through it. He is as compelling when he’s spinning morality tales as when he’s rapping, “Let the slugs bust,” on “Shoot the Club Up.”

The musical tracks on the album match Bone’s somber tone with slow throbbing bass sounds, molasses-thick keyboards and surprisingly hip-hop-worthy samples from such quirky ’70s fare as “Sara Smile” by Hall & Oates and the theme from “The Young and the Restless.” The album also contains more cameos than a thrift shop showcase, with appearances by Fat Joe, Big Punisher, Snoop Dogg and Mariah Carey, among others. But, regrettably, these frequent guest spots only make an overlong album seem even longer.